The Persistent Gravity of Cross Platform

Agilebits recently caused a stir with their announcement that they’ve rewritten 1Password 8 as a cross-platform Electron app, replacing their well-loved native Mac app. The takes came hot and fast. Like many developers, I love and appreciate a well-crafted native UI, and I’ve been somewhat skeptical of the consistent trend towards cross-platform app UIs.

And this is kinda true. Like, it’s true enough for a hand wavey explanation of why cross-platform tools are popular. But it is wrong enough that this mental model tends to obscure exactly why the latest large, profitable company has gone down this path. Each time a cross-platform app has found itself in the crosshairs of the internet, I hear a variant of this question: “What is it about enterprise companies that make so many of them abandon native apps, when they could surely afford to develop one app for each platform?”

In practice, the tradeoff is about more than “cheap vs. good”. Unintuitively, sometimes native tech can actually be the cheapest way to achieve a certain goal, and sometimes cross-platform technologies actually lead to better products, even for very well-funded companies. So what is a useful way to think about the tradeoff?

Over the last decade I’ve talked to people at hundreds of companies about how they’re developing and supporting apps, helping them evaluate and plan native and cross-platform app work. While there are a lot of factors that go into this technology decision, there’s one that I think is particularly illuminating.

Imagine the hero case for cross-platform UI: a complex enterprise app intended for a couple thousand employees to use on various platforms. They’re required to use the thing for work, and they need to be trained on it, but does it need to delight them? It does not. “Delight” is near the bottom of the priority list, between “cool soundtrack” and “joystick support”. The features just need to work, consistently – and cost effectively – across platforms.

Given that, enterprisey companies love cross-platform tools. Enterprises love feature checklists, and there is hardly a term more synonymous with “questionable UX” than “enterprise software”. A classic criticism of cross-platform tools is that they often get you to 75% quality quickly, but the remaining 25% gets increasingly difficult. But if 75% quality is as far as you need to go, then I guess you’ve successfully fulfilled your fixed-bid contract.

Where things get interesting is when you look at customer-facing software. Products where the experience is a big contributor to success or failure, and the higher “UX ceiling” that platform-specific UI code enables can help retain paying users. It seems, conceptually, that a big company willing to spend big money to build really nice native Mac and Windows apps would be in a position to outcompete the Electron-based Slacks, Figmas, and Spotifys of the world. Right? So why isn’t that happening?

The Exponential Cost of Coordination

On a small product team, keeping a couple native apps consistent with one another isn’t hard. At Steamclock, we’ve built and iterated dozens of nice native apps with teams of 3 to 6 people, and kept iOS and Android products in sync with one another and their siblings on the web with little difficulty. At this scale, the UX and simplicity wins of native tooling can be a huge win.

However, consistency starts to become a problem as your product and organization grow. When you’re rapidly hiring, rapidly adding client features, and adding support for a third, fourth, and fifth platform, things start to get dicey. 1Password’s Michael Fey touched on this in his excellent post about the development of 1Password 8:

Inconsistencies both small and large had crept into our apps over time. From small things like password strength being different between platforms to larger things like differences in search results and entire missing features.

This matters because as the number of feature, design, and bug variations between your platforms grows, coordinating clear conversations about your product gets harder.

At first this can be mitigated by throwing money at the sales and support teams, but as the inconsistencies accumulate, you hit a more dangerous problem: the product teams start to struggle to reason about their own product. You end up with siloed platform teams that aren’t on the same page. Product conversations slow down, wires get crossed, and details get neglected.

Some companies successfully avoid this fate by keeping their client apps lean. If you can stay disciplined in keeping your product simple, your platforms few, and your teams small, keeping everybody in sync can be workable. A critical tactic here is keeping as much complexity as possible server-side, working to keep your client apps as “dumb” as possible so you’re not simultaneously iterating a horde of logic across many different clients.

If your team size and product complexity do approach Scale™ though, laden with giant teams and reams of features across a half-dozen platforms, the inconsistencies will eventually get out of hand.

So at a certain size of product org, you get crackdowns on consistency and coordination. Product instates more process to keep the platform codebases in sync. More time is spent on procedure, docs, and formality. Feature quality goes up, but feature progress gets slower. The product becomes easier to communicate about since it’s more consistent, but… actually it’s not changing very much anymore at all?

So now you’re keeping a half-dozen featureful codebases consistent, but at a high cost. Hiring more engineers makes for a non-zero improvement, but the exponential – or at least super-linear – nature of coordination overhead means the additional product velocity per new hire can get disturbingly low.

Slow and ineffective loses the race

Slow is a dangerous place for a product company to be. Slow product teams tend to be outcompeted by fast ones. We complain about how Figma and Slack don’t feel native, but why are most of us using Figma and Slack? We’re using them because they outbuilt and outcompeted their native competitors. There are so many things that could improve in these products, but they’re the best tools yet built for their purposes.

The reality of coordination overhead at scale adds an additional layer to the tradeoff between cross-platform and native tools. Yes, native code is well suited to creating great user interfaces, but at a certain size of product team and for a sufficient number of different client codebases, the systemic costs of coordinating feature development across that many platforms itself will undermine the user experience. 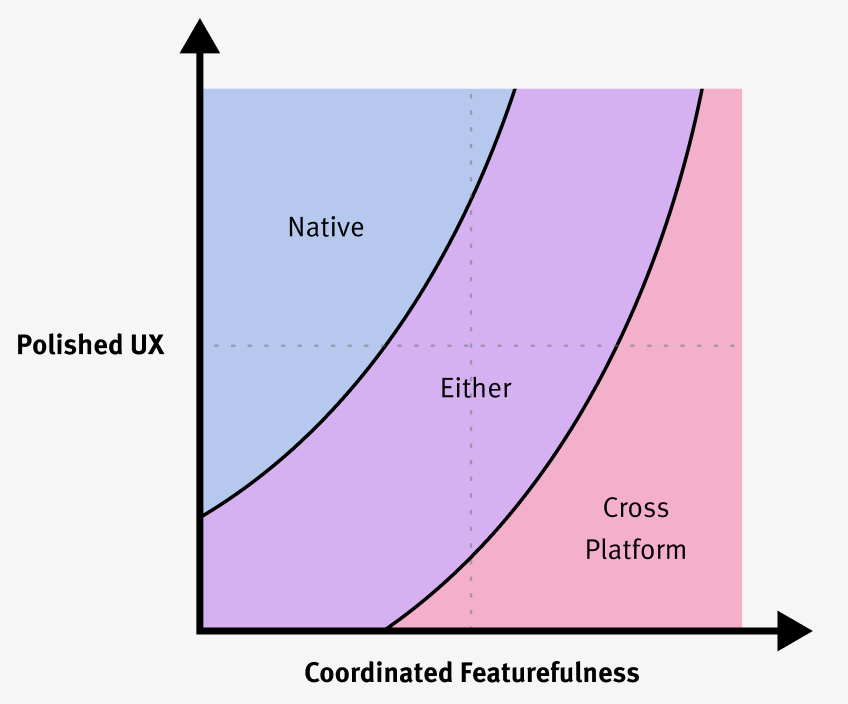 So instead of a straightforward “good vs. cheap” tradeoff, we get a kind of non-linear tradeoff where the teams trying to coordinate the most feature work across the most number of platforms feel an incredible gravity towards cross-platform tools – even if a high priority on UX would predispose them to building native clients. On mobile platforms, where teams are often more disciplined about features and more focused on UX polish, the tradeoff is a bit different and teams more often go native than they do on desktop.

Of course, there is more than one way to use cross-platform technology to reduce the drag of coordination. As controversial as 1Password’s move to Electron for UI was, their decision to base all their apps on a shared Rust library was well received. Fascinatingly, in recent years teams like Dropbox and Slack have written about moving away from having a cross-platform core library powering their mobile apps – both teams are now fully native on iOS and Android. In a similar way, there seem to be two long lines of app teams, one announcing that they’ve moved towards React Native, and another announcing they’ve migrated away from it – a topic well deserving of its own post.

In the end, the best we can do is be thoughtful and watchful of these technologies and what problems they solve well. We watch them evolve, talk to people who are using them, and take in what teams share about their experiences – all with a pinch of salt.

Will Rust turn into more of a success story for cross-platform app cores than C++ was? Will React Native tamp down its problems and become a more and more compelling competitor in this space?

It will be fascinating to see.

Next in the Best Of series: What Doesn't Need to Be Done →

Next in the Making Great Products series: What Doesn't Need to Be Done →