Altering Time started in 1999 as my personal website. At the time it was, unfortunately, dubbed “The Edge of Reality”, and hosted on spaceports.com. Hey, I was in grade 9. It was the age of garish background images, rehashed jokes and lists, and dreams. I rewrote and redesigned and again rewrote the crap out of that poor little site for about two years.

In 2001, I got together with two friends of mine to start a little business. The plan was to commercialize a Windows RPG (I’d made a few games by this point, but none had been very profitable.) We started as Antipode Studios, on antipode.ca, and got about as far as high school kids trying to start a business with no product and little plan usually get. (Important lesson: it turns out if you want to make an RPG, your team of three should have more than one programmer and more than zero artists.)

After that dream died, we moved everything to alteringtime.com, and I started adding community features. My friends stayed on as moderators and the foundation for the community there, making for one of the best startup breakups ever (I’m good friends with both of them ten years later.) Forums and quotes were big hits, drawing hundreds of regular contributors. I debuted something called the WTF Sites, where people submitted “Sites that made you say, ‘What the farmer?’”. Nowadays these things wouldn’t attract a soul in the face of Reddit and Twitter, but at the time they were great ways to pass the time.

I started writing parody news articles, and one in particular got a massive inbound link. When we were linked from realultimatepower.net, the site went nuts with ninja lovers and random passers-by. The community went way beyond friends of friends, and included people from many countries and ages.

The Forum was more interesting than you’d ever expect from such a random gathering of people. There were political debates, there were ninja vs. hippo threads, there was philosophical discussions, and there was an epic incursion between an entire class of 13 year olds and the established members of the site. Karma was gained, posts were moderated, and Soapish had a baby - and visited us from Nebraska!

Above all, however, there was Just Ask Oldguy. My boss, a technology executive, a wise man and a wise guy, used the Forum to start a Q&A service. The rule was that only one question could be asked until he answered, and he always gave much thought and research into his answers. At times there was great competition for who would be able to ask the next question, and he would employ guest answerers for tricky questions. All in all, Just Ask Oldguy was an awesome part of Altering Time.

Games were still in my blood, and I used Altering Time to launch two: Political Asylum in 2002 and Engineering Faith in 2004. As with everything else on AT, the community that rose up around them was awe-inspiring to me, and I miss every one of those people.

As I finished university, got a job at Apple, and worked on other projects, Altering Time was neglected. My personal friends had stopped using the site and playing the games, and my dedication lapsed. In a lot of ways, I felt like a neglectful parent - here were a couple hundred people playing my games, using my forums, and they were increasingly suffering from bugs and spam. I’d often feel a pang of guilt when I thought about it or played with it, but could neither bring myself to go back to working on it 10 hours a week, nor to shut it down, so it just slowly declined.

And that brings us to today. Things slowly ran down, and we’re now at a point where I feel like shutting down does more service than harm to the community. I still have a lot of love for that community, though, so I wanted to put up this yearbook, of sorts, for us all to remember. Here’s to the users of Altering Time - thanks for all the quotes, links, debates, questions, bug exploits, and assassinations. You are missed.

“The Edge of Reality” 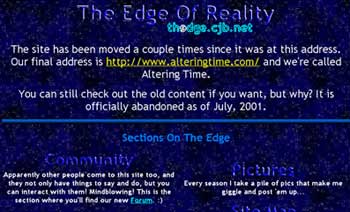 Embarrassing. Every page of the site at this time had a different garish background image. Yes, that is a starfield background.

This was probably the peak of us thinking of the site as a startup. We had a long-winded slogany rant and info about the Windows game we were making. 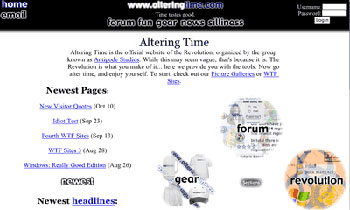 This was one of the first homepages when the site was branded Altering Time. In a lot of ways the look and feel was consistent from here on out, but this was before any games had launched. 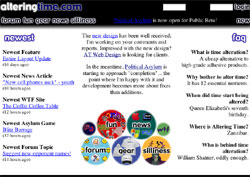 This was near the peak of Altering Time. Asylum was quite popular, the site was very active, and there was a lot of active development.

Notice the “Gear” link. I spent many hours designing gear and subscription packages for the site. Altogether I probably made $300 or so on it – I’m not sure whether to be proud or embarrassed.

This was the final design from Altering Time. It went live in 2006, although this was taken just before I put up the notice that it was retiring. When users were logged in, it would instead show a list of all the recent activity, in a way I imagine nowadays would be likened to the Facebook news feed.