This an old, sarcastic news post from when I was in college. I apologise.

UN HEADQUARTERS, BELGIUM - Colin Powell, the US Secretary of State, made a highly professional multimedia presentation yesterday that provides “irrefutable evidence” that Iraq has weapons of mass destruction. He proved that Iraq is linked to terrorists, has highly dangerous weapons, flaunts the United Nations when it suits them, and is lead by an untrustworthy man who has been known to deceive.

Luckily for all of us, none of the above could be said about the United States. Led by a always-truthful angel, their government has no dangerous weapons, and nobody from America has ever blown anything up. The fact they owe many millions of dollars in UN fees isn’t because nobody can make them pay; it’s because they’re so busy enforcing UN Resolution 1441… regardless of whether or not the UN backs them up.

This irrefutable proof came primarily from high-quality sattelite spying photos that the Americans took of Iraqi facilities. The above photo shows unquestionably a chemical weapons plant, with the vehicles around it marked with arrows. These vehicles are obviously going to take the chemical weapons away, so inspectors won’t find them. While some of the other pictures weren’t quite as clear as this one, they all clearly show that they’re of a building in some country, and that that building could contain dangerous weapons. 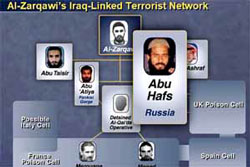 Even more proof came in the form of an audio recording of two people speaking, of which Colin Powell kindly translated for us. They were Iraqi miltary officials, discussing their deceptive activities. One of the most damning that Powell highlighted went as follows:

“The fact that two people had the above conversation,” said one miltary analyst, “at one time, somewhere in the world, and the US recorded it, is damning enough evidence that war should clearly start immediately.” Linguistic experts warn that the translation will have to be double-checked to make sure that this conversation wasn’t less conclusive than it seems to be. “Luckily for us,” said one linguist, “we couldn’t imagine a less conclusive conversation.”

Also above is the proof that Iraq has ties with terrorists. Not only are there terrorists that were born there, some have been known to visit as well. Powell showed us how these terrorists also had bases in countries such as France and Spain, however the truly evil base is in Iraq.

The author of this article is now ready to sacrifice his life for the downfall of this obviously dangerous menace; a true threat to freedom.