Review: Coke and coffee, sitting in a tree 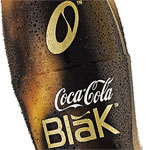 I sampled a specimen of the new Coca-Cola Blak today that my roommate picked up from Washington state. We don’t have it here in Canada and I didn’t see it when I was in California or Nevada this summer, so I’ll post my review for those who haven’t tried it.

Coca-Cola Blak is a combination of Coke and coffee. Yes, that does sound pretty awful, doesn’t it. We like Coke, and we like coffee, but that doesn’t mean we’d like a combination. They’re as natural a mix as beer and garlic.

Fundamentally, it’s Coke. It’s not like half and half coke and coffee or anything horrific like that. There is real coffee extract in there (joining longtime pals like “natural flavors” and “phosphoric acid”) but not so much that it muddies the drink. It looks, for the most part, like normal Coke. The taste is a balanced blend of a caramelly Coke with a coffee finish.

As you would expect, it’s chock full of caffeine. It has twice as much as normal Coke actually, which is fine by me. I’m definitely feeling the buzz, taking advantage of the fact my office chair has bounce in it. I can see this as a wholesome alternative to frappucinos on a hot day. Okay, maybe not wholesome.

It comes off as fairly sweet, even though it has half the calories of normal Coke. “Howcouldthatbe!”, you may buzz. Well, Coca-Cola Blak is sweetened with high fructose corn syrup, aspartame, and acefultame potassium (ace-k). Not sure which of the three is worst for you? Now you don’t have to decide!

Similarly to Coke C2, they went the multi-sweetener route to try and please everybody. This is annoying for someone who not only distrusts aspartame, but isn’t fond of the taste. Now you can have both a coffee aftertaste and an aspartame aftertaste! I would opt for no artificial sweeteners, with an overall reduction in sweetness. Luckily I’m from Canada, where our normal Coke is also less sweet than the American version, so there’s a chance of that.

Coke wants you to think this is a classy, sophisticated beverage, and claims “every sip is an experience to enliven your senses and welcome new possibilities”. What is this, fine cognac? In any case, I would say it’s classier than a plain can of Coke. In line with this, they’re charging a bit more for Blak than for normal Coke, which still well less than a drink at Starbucks. Oddly the bottle doesn’t even mention that it’s coffee-flavoured, instead referring to itself as a “carbonated fusion beverage”. For all I know that could be a Bacardi Breezer.

Speaking of the bottle, my specimen is 237mL (8 oz). This is quite small by American standards (I had to laugh at the size of the “Medium” drink I was burdened with in San Francisco last week.) I’m very happy about this - I’m more likely to buy any drink when offered in this size. I particularly hate when you want some Coke but the only option is a 600mL (20 oz) bottle. I rarely want that much, and never need that much - send the rest to starving kids in Elbonia or something. Anyway, the 8 oz size is great for Coke Blak, due to its full flavour and intoxicating effects.

So will this new Coke alter my drinking habits? Definitely, as long as they offer it chilled in a place I can conveniently reach. And take out the aspartame. So… no. I will congratulate Coke, though, on making something that sounds disgusting into something that’s actually pretty good.