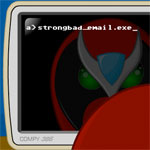 Once upon a time, the de facto computer interface was the command line. A prompt with a cursor, and incredible power to take you where you want to go with a few keystrokes. GUIs evolved to get you where you were going more easily, but the Linux world realized how productive command lines can be, and bash still brings many geeks joy to this day. The important realization was that for a command line to be productive, it has to have a lot of awesomeness mixed in. Shortcuts like ~, -, .., and things like tab completion take an archaic command line and make it awesome.

The same thing has happened on the web. At first browsers just had a command line, waiting for you to type http://www.mit.edu/. Over time, mouse-oriented navigation became more popular with users. Still, the original command line approach had a lot of potential, it just needed some more awesome.

The first attempt at an awesome command line was “Autocomplete”, which guessed what URL you were typing based on simple prefix matching. Of course this only works if you know the exact URL you want, and once you’ve typed enough to uniquely identify it. The reality is that a lot of users want to search, not type long URLs.

Firefox 2 added better searches to its command line. By default, if you type in a search term instead of a URL, it acts as an “I’m Feeling Lucky” search. The location bar input “ruby” is a great example of why this is awesome. In Safari, “ruby” goes to Kay Jewelers, via ruby.com. In Firefox, it goes to the Ruby language website, via Google. Which did you probably want? On top of that, you can easily set up macros called “keyword searches” ((This is very easy to do. You right-click on a search field, choose “Add a keyword for this search”, type a brief keyword, and voila.)). I’ve set up Firefox to accept “wp Antipode” as going directly to the wikipedia article on Antipodes, for example.

In the upcoming Firefox 3, your browser’s command line finally reaches awesomeness. They even call it the “AwesomeBar”. As you type, it uses a smart index of your bookmarks and history to give you what you’re looking for. It uses titles, URLs, visit frequency, visit recency, and learns from what you click on. It puts your computer to work for you, like Quicksilver and Spotlight. In short, it’s friggin’ awesome. With these features, the command line of Firefox 3 makes navigation so much faster and easier, it changes the way I browse.

Meanwhile, Wired’s Paul Adams, and some in the community, are trying to label this as a misfeature. He doesn’t like that the first time you type “wir” you might get history results from thewire.co.uk as well as wired.com, until you click on wired.com and it learns for next time. He says, “it breaks a major commandment of interface design: don’t radically change the behavior of something everyone’s used to” ((This has truth to it. The real commandment is, do not underestimate the high cost of changing the behaviour of something everyone’s used to. Make sure if you do so, it’s awesome. If Apple followed his version, we’d have no iPod touch or Mac OS X.)). I say, suck it up and enjoy the awesomeness.