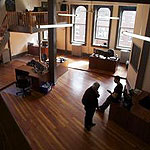 A vital element of a startup community is the relationships between startups. Companies band together to get office space, forward leads to one another, and refer each other to good suppliers. Your neighbour may be your customer #1, or being their customer #1 might give you a competitive advantage. Growing startups hire good people from dying startups, and acquired companies fuel the growth of new ones.

So far at Steam Clock, we’ve had close relationships with Nitobi and Mobify ((…and Mozilla, and Joyent, and iQmetrix, and Foodtree, and Spacelist, and a host of other awesome Vancouver companies.)). We’ve shared space with them, worked for them, had beer with them, and been inspired by their ass-kicking. Our relationship with these two larger startups has helped shape our success so far - how could you not stay on the cutting edge of mobile when surrounded by these folks?

New founders don’t yet have these relationships, so where do they come from? For us, most of our startup relationships started through SFU, VanJS, or simply from being in Gastown. The Gastown area proves that higher the startup density, the more easily relationships form - and the highest possible density of startups is at a coworking space.

The premier Gastown-area coworking spaces right now are The Network Hub and The HiVE. Prior to that, WorkSpace served as our startup nexus, and helped inspire me to start Steam Clock. If you participate in an accelerator like GrowLab you’ll likely share space with other startups in the program.

Jesse Heaslip, in an otherwise interesting post about getting startups to stay in Vancouver, has announced a new startup space called Hack Hut. Uninspiring name aside ((Both the word “Hack” and the word “Hut” feel unprofessional, making the combo pretty weak. It makes me think of a back room where college students can play with Arduinos.)), it will likely be a good option for startups growing past the home office but who aren’t yet able to sublease from another larger, growing company. The price is nice (although it sounds like a money-losing proposition unfortunately) and as long as they don’t end up some distant part of Railtown it should be pretty plugged in to the community.

Bringing startups close to one another is, dollar for dollar, more helpful to the Vancouver ecosystem than tax breaks ever could be.