Running a startup turns out to be weird. 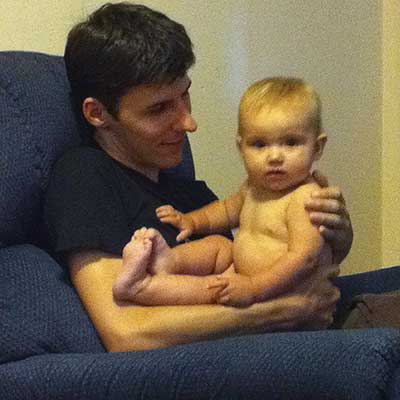 Like all respectable businesses, Steamclock started in a basement. Four years ago, we outfitted Nigel’s basement with the old desks we’d imported from our corporate jobs, and some basic office chairs. Our presence was fascinating to Nigel’s kids, and they’d come downstairs to visit whenever they could find an excuse. They’d often draw us making apps, or map out ideas for their own apps and games.

At that time, whenever I was asked for my job title, I just put the same thing I’d been at Apple: Software Engineer. Our degrees are both in Computer Science, and we took pride in having two technical co-founders. Of course, non-coding tasks would come up - design, planning, testing. These tasks generally went to me. I love design, and Nigel is such a good programmer that it’s kind of crazy for him to be doing anything else. Still, I always felt guilty when I wasn’t writing code. I thought of my day as split between productive coding time and distracting non-coding time.

A few months in, we were notified of a crash in our app WeddingDJ that we needed to submit to Apple by the end of the day - a Friday. We had neglected to test the iOS 4.2 beta for issues, and it bit us. Nigel knew how to fix the crash, but he needed instead to feed his baby and then leave for the weekend. Like it or not, I foresaw spending hours with his twisty audio code determining how to fix the bug myself.

Just then, another solution came to me. “How about, I’ll feed the baby, and you fix the bug.” The solution was simple and rational. So, for the first time in my life, I fed a baby.

As I learned then, babies aren’t very good at eating. She had only recently started on solid food, yet thankfully was receptive to food being put in her mouth. I would put food in, she would push most it back out, and I’d repeat - asymptotically approaching having eaten a spoonful of pear mush. It wasn’t hard work, but I was not particularly qualified to do it. Still, it was, at that moment, my job.

Nine-month-old babies don’t talk much, especially when they’re attempting to eat pear mush, so I had some quiet time to think while I worked away. I pondered the fact that I’d left my job writing code for a company I love, so I could feed a baby.

Still, it felt oddly right. My job was to do whatever it took to ship great software. I felt like I was indirectly fixing that crash, ten times faster than I could have on my own, and at the same time doing something I’d never done before.

I knew at that moment I’d made the right move.

Next in the Steamclock series: Can't Stop the Music →

Next in the Moments in a Life series: New Here →

Next in the Best Of series: A JS Framework on Every Table →