Guide to the Cold-Industrial Complex

A primer on making sense of cold medicine.

It’s cold season. Yes, that time of year where, despite your best efforts, you have recently contracted one of the over 200 viruses that cause the annoying but survivable group of immune responses we call the cold.

Naturally, you are familiar with the baseline approaches to managing cold symptoms. You drink copious amounts of water, and you get enough sleep. You wash your hands religiously – both to avoid passing the cold on to family and coworkers, and to avoid contracting the dreaded and lengthy compound cold.

In the likely event that you drink multiple coffees a day, you may also want to avoid giving yourself the double-whammy of head cold and accidental caffeine withdrawal.

But while self-care is a great start, unfortunately it won’t do much to actually shorten the duration of cold symptoms. Chances are high that, depending on the exact miscreant of a virus that has you in its grasp, you will be mildly suffering for 5-10 days. After a couple days of honest rest, you’re probably going to want to get some stuff done. Thus, you’ll likely find yourself thinking, “Hey, maybe one of the 73 cough & cold medications available for sale at my local pharmacy might make me less of a useless snot-sponge?”

Warily facing 73 different cold remedies in my local Shoppers Drug Mart, I found myself thinking exactly that. I know anecdotally that some of them are ineffective, and some make you feel like a zombie. Unfortunately, none of the packages were willing to admit their ineffectiveness or proclivity for zombification.

So, I started looking for symptoms. This one says it’s good for sore throat, this one mentions a dry cough. Quickly, I got bogged down in noise.

Things came to a head as I was trying to work out which was better: Tylenol Cold, or Tylenol Flu. Exasperated, I pored over the boxes, looking back and forth. As impossible as it seemed, there it was, printed in the legally required black and white: Tylenol Cold and Flu are… identical? The same three active ingredients in the same quantities.

The more boxes I looked at, the more I saw combinations of the same few ingredients, in the same dosages. I saw identical products with different branding. I saw “Day” capsules with the same ingredients as the corresponding “Night” capsules. I saw, for the first time, the deep conspiracy that is the Cold-Industrial Complex. 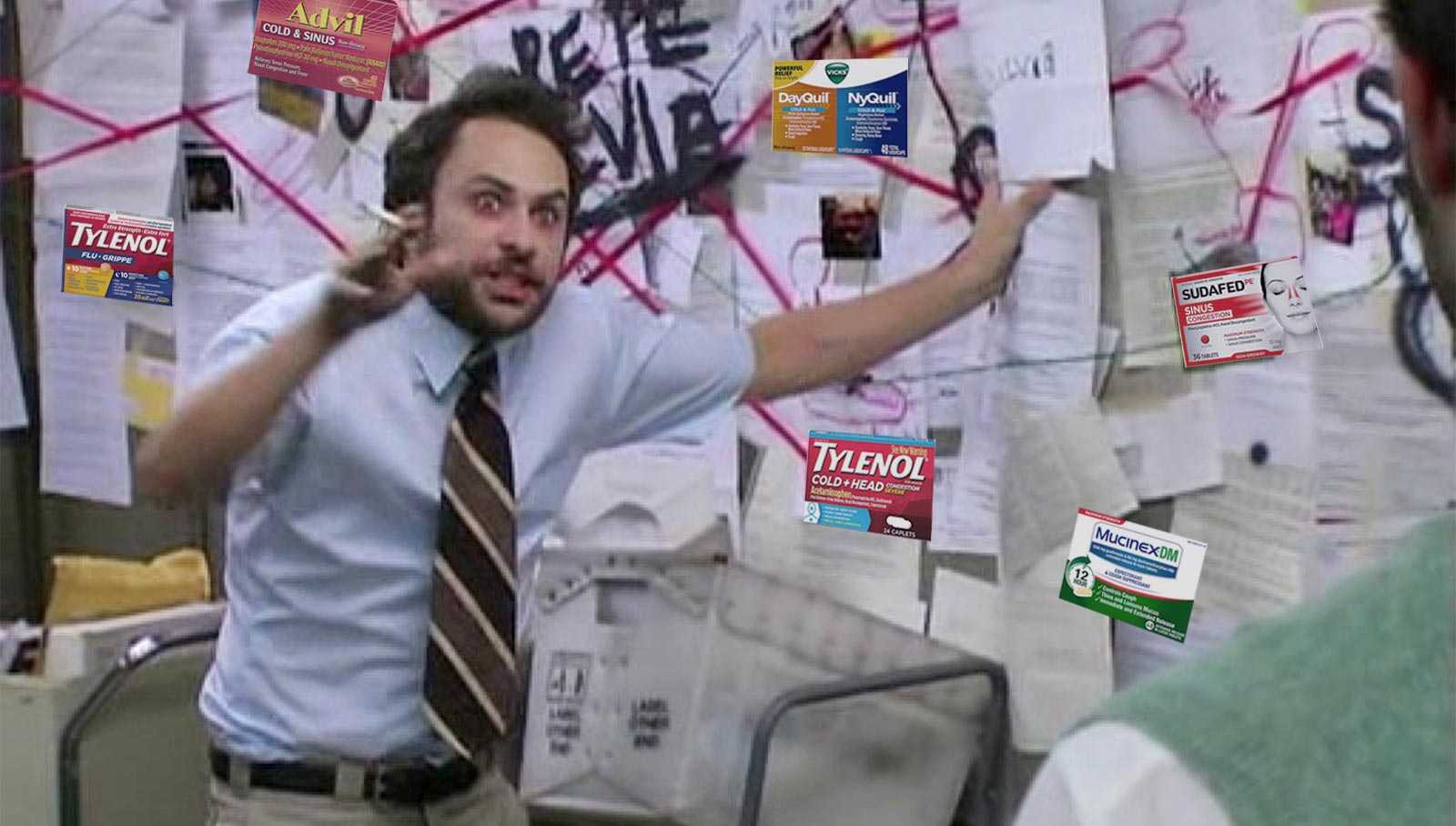 Now to be clear, I am not a doctor. Nor am I a pharmacist. I’m just a guy that makes apps. A guy that makes apps who, in frustration and congestion, created a sprawling spreadsheet containing the active ingredients of Tylenols and Advils, Sudafeds and ‘Quils, name brands and store brands, hoping to find an answer.

Fortunately, I did find an answer.

We know in theory that brand names mean little in medicine. There are only a handful of medicines approved for relieving cold symptoms in the US and Canada, and store brand medications pull from the same ingredients and dosages as the household names. In general, cold meds contain 2 to 4 of the following components:

What is maybe more surprising is that even within a name brand, the ingredients are not consistent. Sudafed, for example, has no consistent ingredient across all its variations. I reviewed a half-dozen cold medicine brands and found that each varied in which components it would use, even between similarly named formulations. Worse, some brands used ingredients that can cause substantial drowsiness in what were ostensibly “daytime” formulas, leading to the regrettable zombie effect.

So your mission, if you choose to accept it, is to understand not the brands, but the drugs. Given your symptoms, recruit one drug each from the following four categories. If you do, you may actually have a chance.

This may be the ingredient you care the most about. If you’re not congested, you’re probably not looking at cold medicine anyhow. For better or worse, are basically two decongestants worth knowing about:

This is the component of cold meds that you are probably most familiar with. Most cold meds contain one of the two most common pain killers.

Ostensibly, antihistamines might help with congestion. This is certainly true if you’re ill-fated enough to have cold and allergies simultaneously. However, it seems that cold medicines incorporate antihistamines less for their theoretical decongestive properties, and more for the fact that they cause drowsiness.

As it happens, the only drugs approved by the FDA for over the counter sleep aids are so-called first-generation antihistamines. These are also the antihistamines used in cold medicines, as they tend to help people sleep – which is surely something worth doing when you have a cold.

However, unless your cold is so bad that you’re just lazing in bed for the day – for example, if you actually have the flu – you probably don’t want to be drowsy during the day. As such, most cold medicines have a “Day” variant that has no antihistamine, and a “Night” formula that causes drowsiness.

Unfortunately, it is not always that clear from the branding which medications cause drowsiness. For example, I’ve found Advil-brand cold medications to be particularly egregious for having antihistamines in packages that are not branded as “Night” formulations. In my opinion this is reckless. At least one study found a standard dose of first-generation antihistamine to be equivalent to a blood-alcohol level of 0.10 in terms of driving. Watch out for antihistamines if you’re hoping to do things during the day, especially for Advil-branded cold meds or anything without “non-drowsy” on the label.

Of course, if your cold is keeping you from sleeping, an antihistamine can be a welcome companion. “Night” or “PM” formulations of cold meds almost always have an antihistamine in them. In my research, I couldn’t find any compelling evidence that any of the approved antihistamines in cold medicines caused more or less drowsiness than one another, nor that any was especially effective at relieving cold symptoms on its own.

A cough can be one of the most frustrating parts of a cold, and is liable to spread the virus to those around you. Luckily, the story on cough medicine is simpler than the other components of cold meds – there is basically one popular ingredient that helps you cough, and one that helps you not cough.

Of course, you don’t have to take my word for it – especially if you have any conditions that may interact with medications. Use this as a starting point for research, and consult a doctor before choosing pharmaceuticals based on a glib rundown from a tech blog.

The key takeaway is that while cold medicines’ brands may provide a helpful placebo boost, the underlying medicines are very much worth knowing and understanding.

There are only a few moving parts here, so consider your symptoms and make an informed choice about which meds you want during the day and at night. With a little research, you too can have cold medicine that may actually help – and avoid becoming a snot zombie.

Although this article is hardly meant to be formal medical advice, if you spot any errors or key omissions, please let me know.

Next in the Going Overboard series: The Unified Theory of Cereal →