Conventional wisdom says that spending hours in front of a screen is not great for young kids. Most guidelines encourage parents not to give kids under age 2 “screen time” at all, and not to give kids ages 3 to 5 more than one hour a day.

Now, in the best of times, limiting a 4 year old to one hour a day of screen time can feel… ambitious. In the worst of times – say, in the middle of winter during a global pandemic, that kind of thing – it’s outright gruelling. That’s because screen time is like pixie dust.

Everybody is happy, at least, until the designated time limit comes up. Eventually – whether by parental intervention, or by Apple’s excellent Screen Time controls – we return to reality.

As a result, parents spend a lot of time asking themselves: what indoor activities are wholesome and engaging enough that they facilitate half-assedly accomplishing things that are required for our household to function?

There are a lot of options. Drawing princesses. Playing with princess Lego. Building structurally unsound princess castles out of random household objects. I’m here to point out an option that is under-utilized, perhaps only for technical reasons: streaming kids’ audio stories.

Once upon a time

Watching a story on-screen is a pretty passive activity. Contrast that to when kids are told a story: they imagine the story unfolding, get exposed to new vocab, and are less likely to be scared when the villain magically transforms into a giant demon octopus thing.

So, if you subscribe to Apple Music – or are willing to try it out – check out their high-quality kids’ stories. They have audio adaptations of many Disney movies, most Robert Munsch books, and countless renditions of classic fairy tales. When we first discovered this, it was like being granted extra wishes.

But there are a few, uh, provisos. A couple of quid pro quos.

For starters, although Apple Music has a lot of kids’ stories, it’s fiendishly difficult to find them. There are no official playlists or categories for stories. They’re just buried deep in a sea of dodgy search results. So you get to play a game.

Hm, do they have a Moana story? Nope. The Gruffalo? Ye… no, it’s just the music. What about Winnie the Pooh? Okay cool, now to locate the story track amongst all this music… Ah okay, I can search “winnie the pooh story” and it’ll work. Oh, other times the tracks are just titled, e.g. “Yertle the Turtle” so if I search “yertle the turtle story” it’ll return nothing…

I said it was a game, not that it was a fun game.

Still, some of the stories are quite good. Our daughter loves them! In some cases she’ll play and listen for an hour while we get some human-adult stuff done. It’s great.

Some of the stories, however, are not great. Some are just kind of poorly acted or produced – tiresome but tolerable. More annoying, to me, is the minefield of “why did we think this was a good idea” plots and topics that many kids’ stories revolve around if they were produced before, say, 2000. You know, princesses whose sole purpose in life is to marry. Characters who shame one another for being fat or ugly. A surprising amount of murder? Generally just a lot of people being horrible to one another.

I know there’s only so much we can do to set positive examples for our kids. But if a 4 year old is going to be enraptured by a story, why not make it one without sexism, murder, or blatant racism? Is it too much to dream?

To its credit, Disney Plus locks down some of its most egregious historical artifacts from being accessible by kids. Apple Music, meanwhile, decided that once a wholesome Winnie the Pooh story completes, it should auto-play “similar” tracks, specifically this uncensored version of Peter Pan. Yes Peter Pan, the movie where characters infamously and repeatedly refer to indigenous people as “redskins”. Where they sing:

After noping the fuck out of that, we decided it would be best to play stories from playlists only.

Unfortunately, there are no curated playlists of kids’ stories on Apple Music. So we had to accumulate one ourselves, via expeditions into the search system, with periodic removal of ones we found too inappropriate or annoying to tolerate. Throughout this process, though, I found a frustrating pattern: our daughter wanted princess stories, but most of the ones I could find were old-school – the Sleeping Beauties and Cinderellas. Sleeping Beauty is wonderfully animated, but the princess’ primary traits are:

Not exactly a robust role model.

Meanwhile, the stronger modern stories like Moana, Frozen, and Brave didn’t have audio versions. Or, in the case of Brave, did have a “Songs and Story” edition, but not available on Apple Music. How peculiar.

Recently though, things changed. Apple Music suddenly added some of Ellie’s favourite stories: Frozen, Ratatouille, Moana, WALL-E, Peppa Pig, and more. And in doing so, they revealed why so few kids’ stories were being released in the streaming era.

Here is a Peppa Pig story released on Apple Music this month. 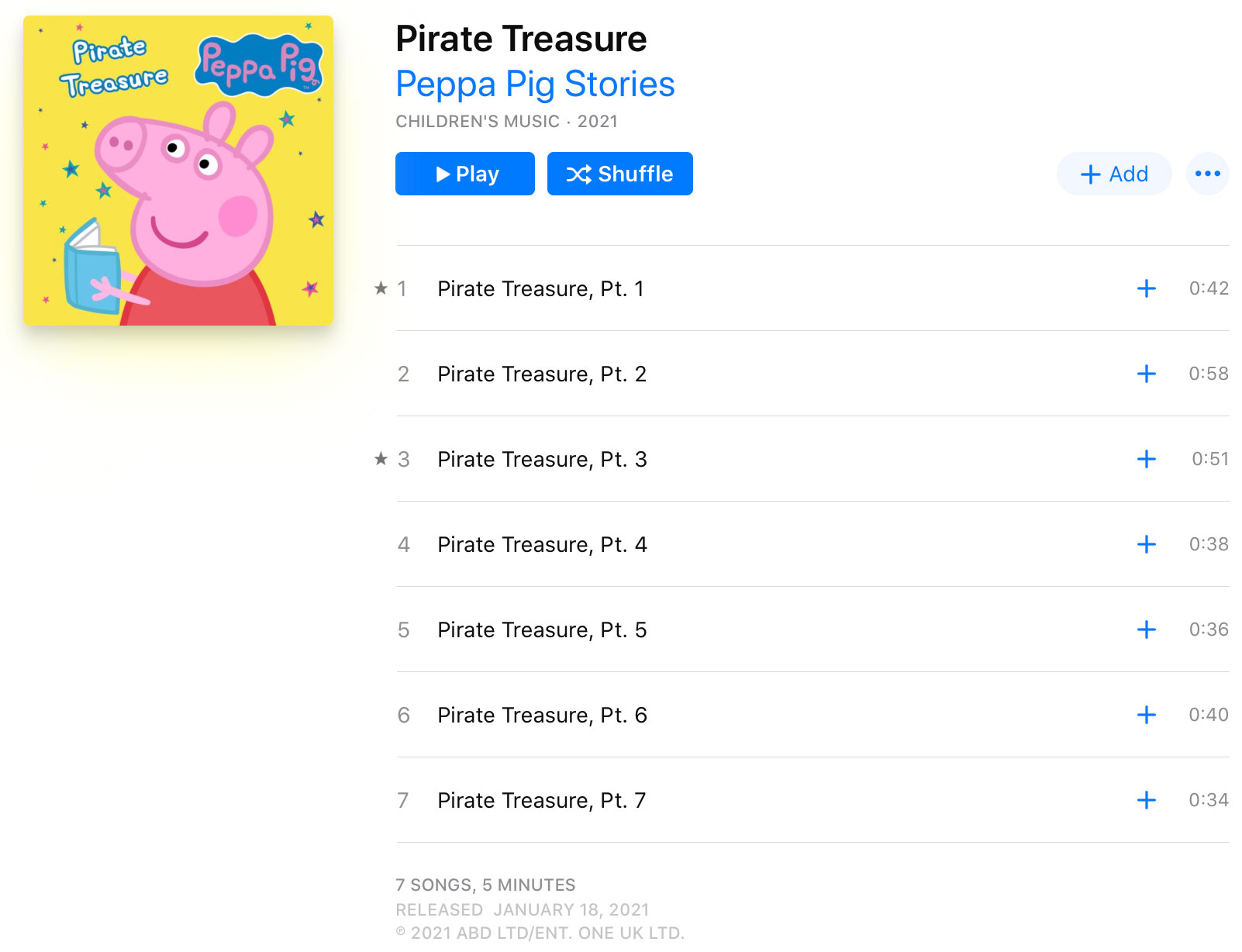 Behold. A 5-minute story released not as a single track, but as an “album” split into seven tiny chunks. 38 seconds, 36 seconds, 40 seconds, 34 seconds.

Of course it was. Because streaming services pay rightsholders not by length. They pay by number of tracks played.

So while Disney was previously producing 50-minute audio versions of their animated movies, they’re now producing 9-minute versions, split into 3-minute chunks. Each story starts with a clear warning, “Be sure to set your device to play in order, and not on shuffle.” Meanwhile, Apple Music persists your shuffle state in such a way that sometimes it will unexpectedly be on. Don’t worry, you won’t notice – not until the story suddenly warps to an arbitrary location. “DAD, THE STORY’S WEIRD AGAIN!”

Streaming giveth, and streaming taketh away.

I want to be… where the stories are

So stories are great, but Apple’s offering here leaves something to be desired. What’s a bear to do?

Audiobooks. Audible has a number of kids’ stories. However, the books often cost $20 each. This can be a good investment if your kid will listen to a given story multiple times, but that can be hard to predict. I’ve long pined for a 30 to 60 minute long version of Moana, but the options on Audible are hours long. Does your kid have a 3 hour long attention span?

Audiobooks are also much less likely to include the voices, sounds, and music from the properties the books are based on. And audiobook apps certainly don’t expect you to build up a playlist of books and shuffle them, listen to the same book repeatedly, and overall behave like a 4 year old. Oddly.

Spotify. A few years back, Spotify didn’t have much in the way of kids’ stories. Recently they seem to have leapfrogged Apple Music on this front, offering not only many of the same stories, but a whole Spotify Kids app. This makes discovering them far easier than on Apple Music. Having kids stuff in its own app also makes it easier to keep kids’ listening interests from destroying your own recommendations and playlists. (Spotify thinks my favourite album of 2020 is the soundtrack to Pixar’s Cars. It is not.) 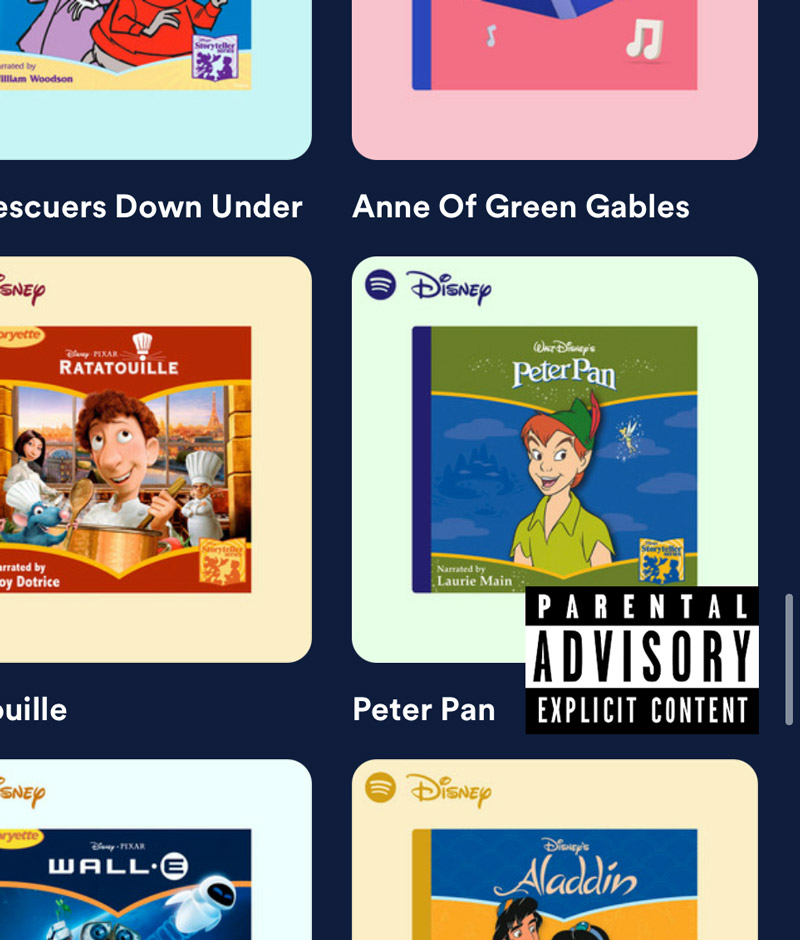 While having curated lists is great in theory, Spotify not only offers the aforementioned “redskins” edition of Peter Pan, but happily features it at the top level of the Stories section in the Spotify Kids app. Yikes.

Hoping for some variety, I recently checked out the popular “Stories Podcast”. I put on their version of “Princess and the Pea” since it’s an interesting litmus test: how do they treat a tale whose traditional moral is that a princess’ purpose in life is to be extremely intolerant of discomfort, then marry?

Before we find out, we get 3 minutes of ads. Two of the ads were for life insurance. Now, I get that ads are part of podcasting. But life insurance? Even relevant ads are not great in kids’ content. 20% of the podcast episode was about Toronto Dominion Bank.

In their defence, they do have a Patreon for ad-free episodes. While that’s hardly convenient, given the annoyance of trying to collect stories within a podcasting app, maybe juggling Patreon downloads would be less annoying.

I should say that their Princess and the Pea was better than most. Unlike the insufferable pea-intolerant royals of generations past, their princess doesn’t notice the pea’s discomfort at first. She then susses out that she’s being given an unreasonable test, and uses her wits to resolve the problem. So, that’s cool.

Unfortunately, when I tried to play the episode for Ellie, after two grown-up ads, she asked to hear a Disney story instead. We try our best.

The moral of the story

I do think audio stories are a great addition to any parent’s bag of tricks, even if they’re a little tricky to collect. I’ve exported the current state of our ‎Kids’ Stories playlist on Apple Music – if you’re curious, be our guest.

And to any poor unfortunate souls entertaining young ones out there, stuck inside and trying to make do: best of luck.

For better and for worse, this too shall pass.