(Back to about Altering Time.)

I developed Political Asylum from 2002 to 2004, and it stayed online until 2010. It was an online game where you took the role of a politician, vying for power and fame. Asylum was turn-based, web-based, and multiplayer. You could run slanderous ads, assassinate people, gamble illegally, burn each other’s signs, and if you got bored you could commit seppuku with a frisbee.

The goal was simple: build something on the web for my friends to play that has never been done before. I’m sure there are many multiplayer political games by now, but at the time any games in this category were either medieval fantasy games or science fiction.

Since I was playing against my friends and I’d written the algorithms, I expected to be unfairly dominant in the rankings. Much to my surprise, I was pretty bad at the game: I thought in terms of how the game was supposed to work, rather than thinking about how it could work. Many people made a name for themselves exploiting amusing bugs, including the one where crappy advisors would actually pay to work for you, and the one where somebody assassinated each of their opponents ten times.

The community that rose around Asylum was incredible. People I didn’t know from all around the world joined my friends, resulting in more than a hundred people playing at a given time. CamelF was the top player of all time, and I don’t even know who he is - but he played 104 month-long games of Asylum. I was 18th best of all time (I played 30 games). Active forum members ensignyu, nitsua, and Andy_R made the all-time top ten, but nobody I met in real life did. At its peak, Asylum had almost a million page views per year.

Possibly the most satisfied I’ve ever been as a developer was the day I launched, in the summer of 2003. I put the game live, and everybody I knew in person who played went out for a big celebratory dinner (maybe 15 or 20 of us.) The feeling I had that day has since driven me to ship things, finish things, and, interestingly, to close down Altering Time when it was time to do.

As Political Asylum rose up the ranks in Google, I occasionally got emails from people actually seeking political asylum. This blew me away, and scared me somewhat, but I always tried to point them in the right direction.

1600 people played Asylum over its existence, and 167 of them played 10 or more month-long sessions. I learned a hell of a lot, had a lot of fun, and will always feel lucky that so many people enjoyed something I’d created.

Check out the gallery below for some bad user interface design, and comments about how the game worked.

The Political Asylum logo. Copperplate and Sand, plus gratuitous effects.

This is where a lot of the fun was. Putting out ads was neat, accusations could be interesting, and gambling was good for a laugh if you were maybe giving up on your politician this round.

Spying, though, was a hit. You could scout them, or get details on how they’re running their campaign. If you were feeling cocky you could burn the signs they’d put up, and if you succeeded they wouldn’t know who’d done it.

The ultimate operation was the assassination. If you succeeded, your target’s career ended most darkly. Although his son (or daughter) would take up where the assassinated politician left off, it was a devastating blow. Much more devastating, however, was to be caught trying to assassinate somebody. Therefore, everybody tried to pay their Security staff well enough that they were safe. Overall, assassinations added a lot of edge and fun to the game.

If this isn’t a artifact of adding features without reconsidering UI complexity, I don’t know what is. 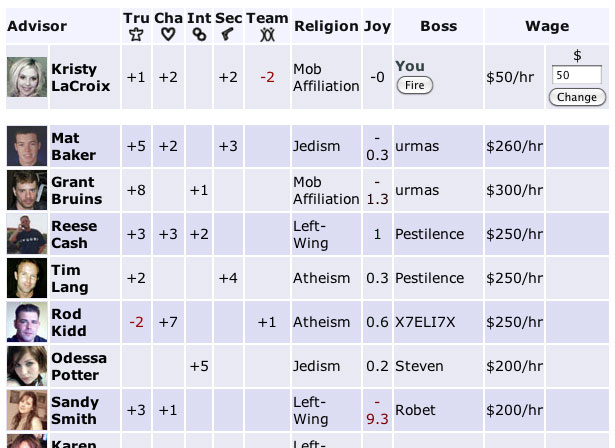 The advisors were one of people’s favourite things about Asylum, myself included. I actually went around and hoarded a bunch of portraits of people online for the advisors, assuming I was too small to be sued or even noticed (I was correct.)

Each advisor was generated using a carefully cropped photo, random attributes that were influenced by that photo, and a randomly generated name. You could treat them well or poorly, steal other peoples’ advisors away, and more. 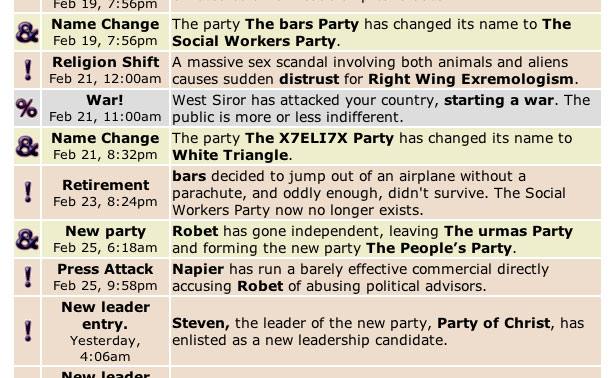 Seeing what everybody else was doing gave the game a much more social feeling. In large games it got very noisy (something that Faith addressed later) but it was still interesting. 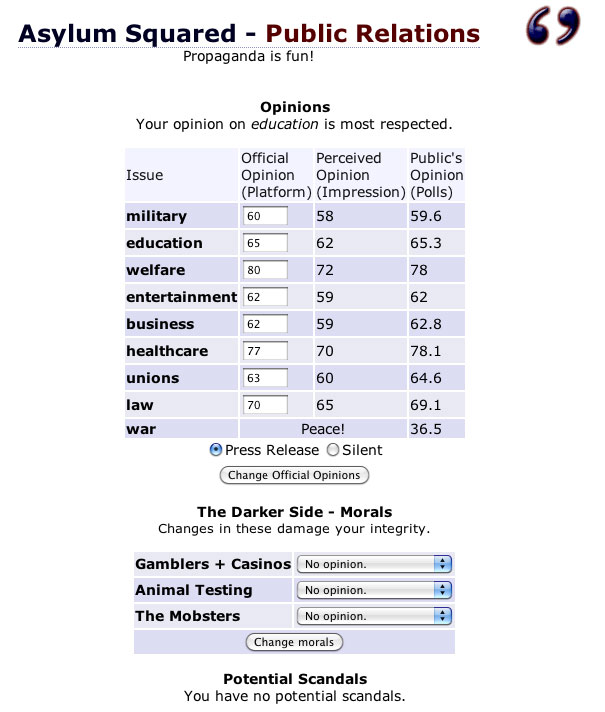 Asylum tried to translate the subtle political differences between what one’s opinions are, and what the public thinks one’s opinions are. This was a stupid idea. Worse, the interface for managing it was also stupid. Nevertheless, opinion management was crucial to getting the vote, and many players got very good at it. 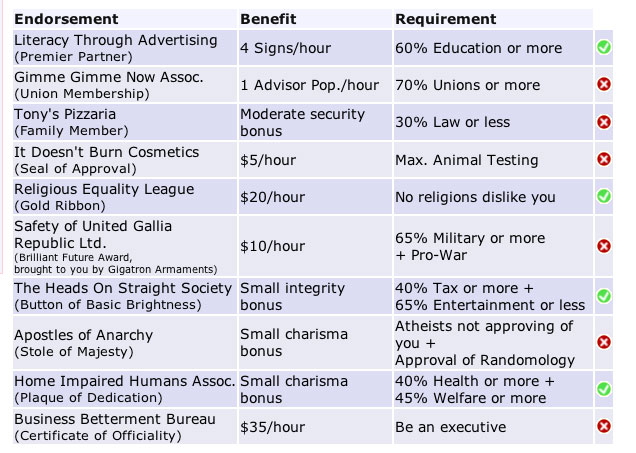 Depending on how you treated various interested parties, you’d get bonuses and penalties. I’m not sure how much it added to the game strategy, but at least they made me feel clever. 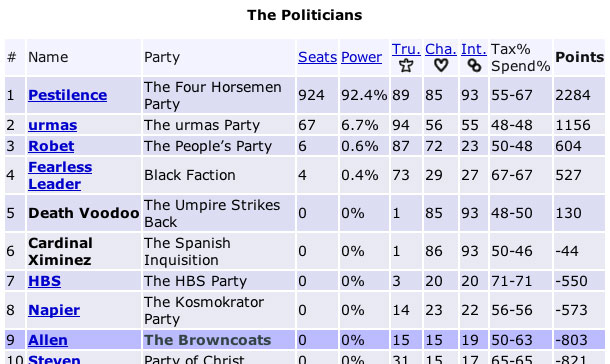 Players spent quite a bit of time looking at this report, comparing their success to their enemies’. Just like real life, the public wouldn’t even vote for new politicians at first – they would vote for the incumbents, who were completely stupid computer-controlled opponents. As the game went on, most players would a percentage of the public’s vote. In the game pictured, one player is completely dominating, which was unusual during the heyday of Asylum. 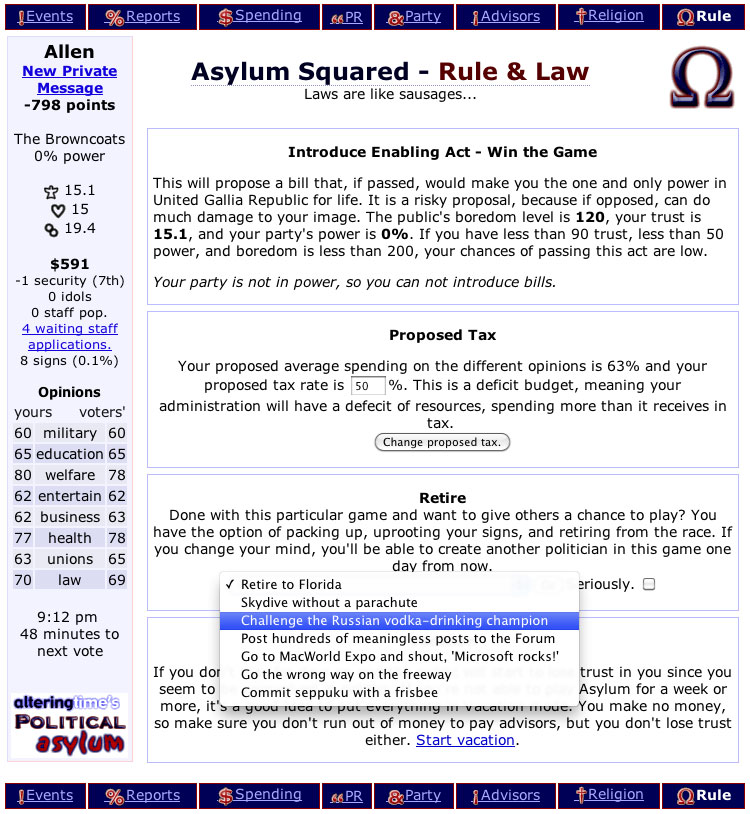 The interesting part here is how to win the game. To win Asylum, you needed to pass the Enabling Act: a law that abolishes all your enemies’ parties and installs you as a dictator. Kind of dark, but hey, how else could such a game end?

In general the way to do this was to get a majority of the public’s vote by either banding together with other players or by assassinating your competition. In very long games though, the public became “bored” and was much more willing to let somebody win.

Also worth noting here is the sidebar, which was ever-present in Asylum. It gave you a quick reference of your resources, attributes, and opinions.

Each level of each technology had an increasingly ridiculous description. For example, the upgrade from the Team of Security Ninjas was the much-superior Single Security Ninja. You could put ads on the moon, meet religious leaders at a Cloud-Level Mountain Citadel, or get a 4D logo with sound and taste,