The Fall and Rise of Podcasting 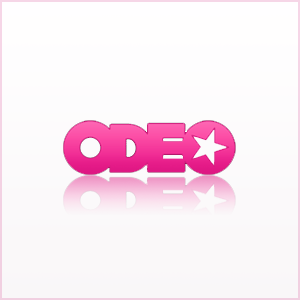 In February 2005, Ev Williams and Noah Glass launched an exciting new podcasting business called Odeo. Podcasting, or “audioblogging”, was booming. The Great Startup Cynicism of the early 2000s was lifting, and podcasting was the Next Big Thing. The New York Times explained:

Mr. Williams, who is 32, helped found a maker of Web logging software, Pyra Labs, which he sold to Google in 2003 for an undisclosed amount of stock, and then stayed at the company until last October. He predicts that podcasting will repeat the steep growth curve of the text blogging phenomenon - which went from only a few thousand blogs when he entered the field in 1999 to more than 7.3 million today.

As blogging exploded, so would audioblogging. Anybody with a cheap mic can now throw up a recording to the world! Soon, millions of people will be recording their own podcasts, and millions more will pay to listen to them. A flock of podcasting startups formed, looking to ride the golden wave to riches.

The wave didn’t come. In fact, a week after Odeo launched that June, Apple added a podcast directory to iTunes, slaughtering Odeo’s core product. Only a year after startup darlinghood, Noah and other Odeo staff left the company. Ev, Jack Dorsey, and Biz Stone remained to tinker with one of Odeo’s side projects, which became somewhat more successful.

In the meantime, the bubble around podcasting popped. Without top-quality shows, serious advertisers, and loyal listeners, the hype died. Google Trends paints a grim picture of public interest in podcasting. 2005’s fervor is a distant memory, podcasting was not the Next Big Thing, and Odeo’s death in 2007 was the dead end that proved it.

As the startup echo-chamber was bailing out of the podcast world, people like Dan Benjamin, John Gruber, and Merlin Mann were bailing in. 2007 seems like recent history, but for some context, listen to John Gruber and Dan Benjamin discuss the original iPhone on first episode of The Talk Show. Even more surreal and time-warped is Merlin Mann’s 2007 interview of John Roderick. Odeo was a long time ago.

As the hype around podcasts became a distant memory, this motley crew of reformed programmers worked to redefine how good a podcast could be. In January 2010, Dan Benjamin jumped into podcasting full time, launching 5by5. I was convinced he was crazy, but soon enough 5by5’s brand of high-quality conversational shows converted me into a podcast listener.

At xoxo this year, Marco mentioned this coming of age during a talk about his future plans and why they involve podcasting:

“They’re going through a boom of supply and demand right now. They’ve been around for over a decade, but in the last few years, people like 5by5 have come out and really raised the bar and brought a lot of people in.” 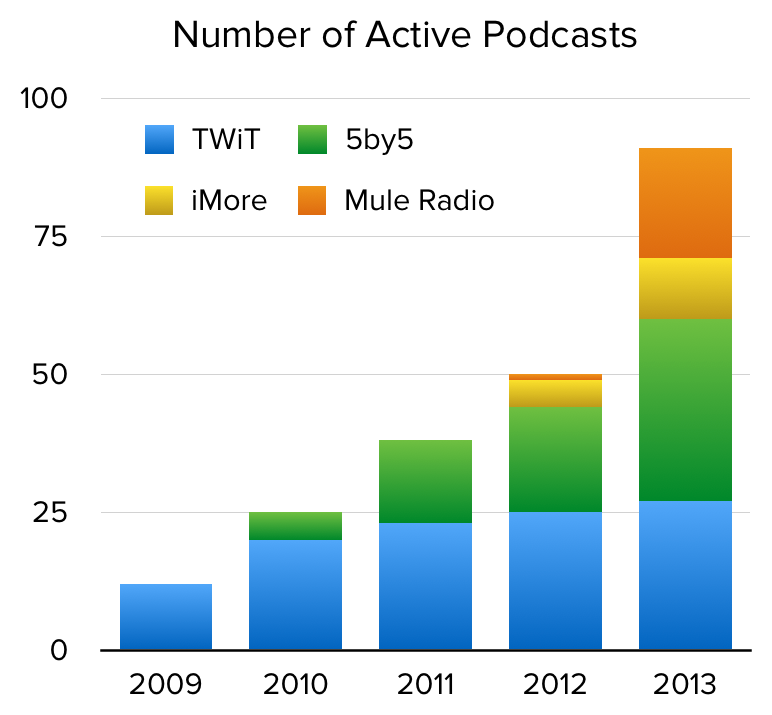 Indeed, 5by5 has raised the bar. Since they launched, the range of shows available has increased dramatically. In 2010, professional tech podcasts were dominated by the likes of TWiT. Now, there are more good shows than I could possibly keep up with. 5by5 runs 34 shows, iMore runs 11, and Mule Radio runs 20. Further, a host of indie developers now run great independent shows, making it even harder to keep up.

So the number of geek-oriented shows is definitely going through a boom. That’s great, but it’s driven me to wonder: is this is actually sustainable, or is it just another bubble of perception like Odeo was?

It’s Squarespace all the way down

To understand sustainability, we need to follow the money. Unlike advertising elsewhere, podcast advertising is dominated by a few players like Squarespace and Hover. Are these big advertisers going to burn out on podcasting ads, or do they know something other companies don’t know?

Squarespace, in particular, sponsors an incredible number of podcasts that I know and love. My initial assumption was that they were fuelling the podcasting industry with a hoard of Venture Capital cash, gunning for a certain rate of growth. Although they did take $38 million in VC funding in 2010, it turns out that they’re they’re profitable, growing, and aren’t actively seeking more investment. By all accounts, Squarespace is simply a growing business that spends a lot on advertising, and are using podcast advertising, among other forms, to kick ass and take names.

For a second sanity check, I looked at Hover, another big advertiser. Here’s a direct quote their head of marketing on their first podcast ad:

Bam. As a matter of fact, Steamclock is now a customer of Hover’s because of the ads I’ve heard on podcasts. The quality content that 5by5, Mule, and others are creating is funded by an advertising method that really works, at least on geeks.

The audience is listening

So the content producers are growing, and the advertisers are growing. What is the audience doing? I mean, if only geeks listen to podcasts, listenership can’t be growing that much can it?

As it happens, This American Life, which any sane podcast listener would have in their feed, is seeing serious growth from their podcast. NPR’s Ira Glass says,

“We’ve fluctuated between 1.7 to 1.8 million (listeners) pretty much for the last decade on the radio,” says Glass. “At the same time, we’ve gone from not having a podcast to having 800,000 people who hear us that way.” 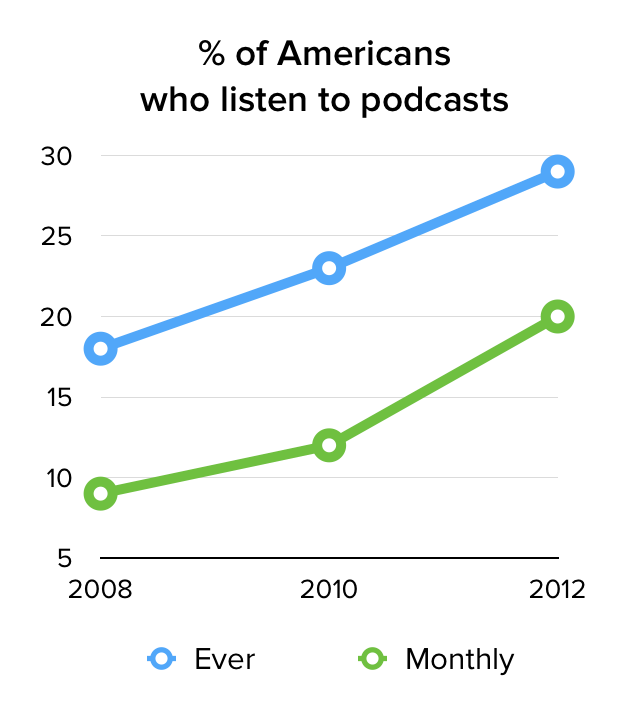 Since the 5by5 era began, there has only been one group studying podcasting specifically. Their reports are unfortunately irregular, but between 2010 and 2012, they measured a 65% increase in the number of monthly American podcast listeners. 65%. That is some spectacular growth for a format that isn’t the Next Big Thing.

Surely this growth can’t all be from geeks. So the jig is up: podcasting is seriously growing, and it’s not just geeks.

With all this growth, what improvements are we seeing in the tools? As of this writing, a horde of developers are building podcast listening apps. Podcast recording apps, on the other hand?

Well, more about that soon.